Edit
watch 01:25
Jurassic World: Dominion Dominates Fandom Wikis - The Loop
Do you like this video?
Play Sound
This article is a stub. You can help Mutant Football Wiki by expanding it. 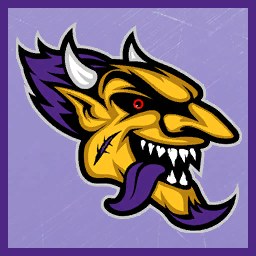 The Purple Mutant Eaters is one of the teams in Mutant Football League. They are a parody of the Minnesota Vikings. Their logo is a yellow mutant head with purple hair, horns, red eyes and a scar on it's cheek shown in profile. Their stadium is The Thunderdome located in Sinnerapolis, Foreskinesota and is a parody of the Hubert H. Humphrey Metrodome, the Vikings stadium from 1982 to 2013, as well as the Thunderdome from Mad Max Beyond Thunderdome. The team has been revealed on the announcement of Mutant Football League: Dynasty Edition. They were released as retail exclusive content for Mutant Football League: Dynasty Edition along with the Hexxon Oilers for PS4 on physical release, free DLC on Nintendo Switch on November 9th, and on Xbox One on January 3rd. It was made available for the Steam version on January 4th as the Purple Oil Pack for 99 cents.

The bloodthirsty cannibals known as The Purple Mutant Eaters have one of the best defenses in the MFL, but with the recent signing of boisterous mega-million dollar quarterback Smirk Buzzins and the emergence of one the best receiving tandems, their offense is poised to take center stage and eat it with a side of ranch dressing. The Mutant Eaters are looking to win a Mayhem Bowl trophy this season and they’ll probably eat that too. - (Mutant Football League Dynasty Edition, Team Scouting)