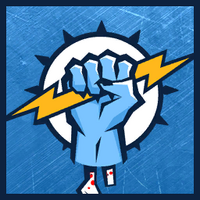 The Los Scandalous Volts is one of the upcoming teams in Mutant Football League, whose logo, a disembodied hand holding a lighting bolt in a roundel with spikes, was revealed on Threadless. They are a parody of the Los Angeles Chargers. Their stadium surprisingly, is not a parody of Dignity Health Sports Park, but instead share Los Scandalous Shake N Bake Arena with the Los Scandalous Damned.

Both Los Scandalous teams were made available as a DLC called the LA Power Pack. It was released first for the PS4, then the Nintendo Switch and Xbox One, and finally for the Steam version on January 25th (the latter for sale for $1.99).

This article is a stub. You can help Mutant Football Wiki by expanding it.