Edit
This article is a stub. You can help Mutant Football Wiki by expanding it. 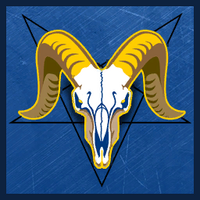 The Los Scandalous Damned is one of the upcoming teams in Mutant Football League, who were revealed for the simulation of their 12/9/2018 against the Midway Mutants. They are a parody of the Los Angeles Rams. Their logo is a ram skull with yellow horns on top of a pentagram in black. Their stadium is Los Scandalous Shake N Bake Arena, located in Los Scandalous, Crazedzonia, which is a parody of the Los Angeles Coliseum all well as SoFi Stadium, and a reference to both the flavored bread crumb-style coating for chicken and pork from Kraft Foods and the 2006 movie, Talladega Nights: The Ballad of Ricky Bobby. Both Los Scandalous teams (including the Volts) were made available as a DLC called the LA Power Pack. It was released first for the PS4, then the Nintendo Switch and Xbox One, and finally for the Steam version on January 25th (the latter for sale for $1.99). Emphasis has been placed on the Damned because of their participation in the 2019 Mayhem Bowl versus the Nuked London Hatriots (mirroring the real-life Super Bowl LIII).